It’s been about two months since #AroundIrelandOnAPushie started!  Now, here are your questions, ANSWERED:

Yes! Geographically speaking Ireland is MUCH smaller than Australia, but not in spirit or friendliness  – I reckon Ireland in bigger in those regards – In milage, I think I’ve done all up 500+!

Shorter days were always a huge factor to me – it’s actually quite scary bicycling at night.  I actually bicycled from Blackrock Castle back to Cork one night in the pitch black on a bicycle path and it scared the bejesus out of me and I even had lights!  So, I made sure to take note and to only bicycle during the day light hours.

I can tell you now, that I am not fully prepared to bicycle in the Irish winter months.  It’s really cold – like BITTER cold!  Also, I figured something out recently… #AroundIrelandOnAPushie was never about the bike – it was about a girl trying to find her place in the world!

I’ve taken a bit of a break in Dublin recently…. and actually – I did bicycle one night around town in my newly purchased red skirt and high boots!  It was one  of the most liberating experiences of my life!  I felt terribly European and it was awesome!  After I told my mate about it, he said, “Tara… maybe it’s time you lock up the bike and walk around.”  It was a pretty fair call… and you know what, I’ve been exploring my surroundings by foot – like now I’m looking up and taking it all in!  My view has changed…  I would have gotten with tunnel vision on the bike.  It’s almost like I’ve since transitioned into another phase of this adventure.  I hope that makes sense.

Burn rubber!  HA!  Wind was against me probably 75% of time time so I never really went that fast.  Plus, I was pretty weighed down. I did eat gravel once on my way to Cobh.  You can read about the crazy experience here!

Ah marriage – ok… actually I’ll break down everything I can remember for you: There have been about 40 wedding invites, 2 invites I accepted but both dudes flaked out, 1 offer of illegal employment at a seedy cafe in Dublin which I refused, 6 dating requests, 1 funeral invite, 1 dinner party I was invited to and attended, and 1 offer of marriage. There have also been countless of coffee’s and guinness’ consumed not to mention the odd comedy gig or lecture I have attended. 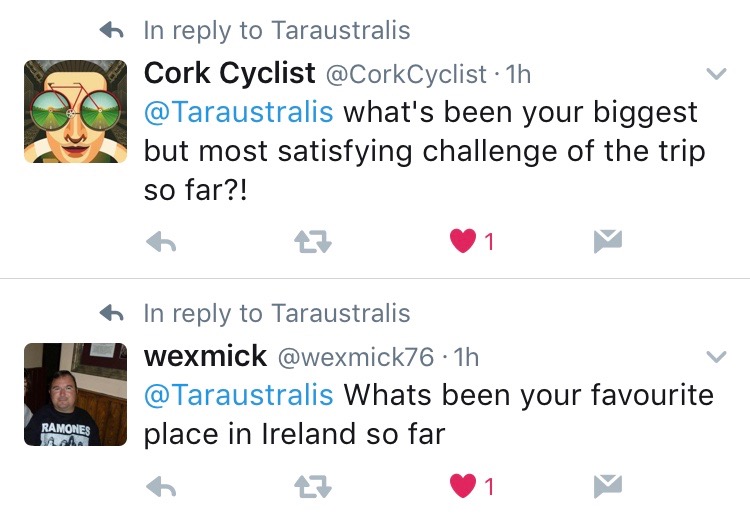 Gosh, these are both great questions!  The most satisfying challenge…..  I’m gonna go less “actual” activities like fighting as a medieval knight, performing as a stand up comedian for Space Week or eating CorksRedFM’s fryup that nearly killed me… I would have to say the following:  First, accepting that I was frickin scared on the roads by the kamikaze drivers –  I had no choice but to bicycle to get to places and I actually made it.  That was cool, like really cool!  I guess the second part is, I made friends.  It’s hard to make friends and I mean, I’m in a foreign country where I don’t know anyone.  Heaps of incredible people have opened their worlds to me and have taken me around to show me their Ireland!  I’m pretty chuffed that I can call them friends!  I feel pretty loved and a bit vulnerable but in a really good way if that makes any sense.  It’s pretty satisfying for me and I mean, I totally picked up something I knew nothing about like bicycling and didn’t fail.  That’s kinda really cool too!

Ok – it was a little of both.  So, I planned fighting with Medieval Armoured Combat and Space Week down in Cork – everything else I pretty much “winging it.”  Also, when the media got involved, I kinda got pulled around the entire country and I just went with it!  And it was awesome!  I loved it.  It’s kinda fun not knowing when you’re gonna end up.  Yes, it gets tiring and probably why I’ve decide to take a time out for myself and spend some time hanging out with my spirit animal, Dublin.

It’s kinda like this:  I was so spontaneous for so long that I felt like I needed normalcy again.  I got myself a warm jacket, a few woolly jumpers, jeans and some nice boots!  It’s kinda amazing to appreciate the little things that I took for granted for so long and I feel that this is also an important part of the adventure.   I’m not a bicyclist and I made sure everyone knew this from the beginning – so, I am find it really nice to realise what is important to me – like, I really miss my hair drier.

Ahhh, spelling – you got me.  GUILTY.  That’s what I get for posting on my phone and not proofing it before hitting the tweet button!  Ok, so Irish roads… this is a good question.  It’s a little bit of column A and a bit of column B.  On the country roads, there are the occasional kamikaze drivers who would drive close enough to tap my pedal.  That scared me – big time!  And, they were speeding too!  From what I could tell, they were mostly older drivers.  The younger drivers speed, but they gave me enough room.  The other part that scared me was… there was NO patience.  Like, there’s a driver coming toward me, and the impatient driver from behind me would just NEED TO PASS at that exact moment – no question!  Just HAD to pass right then and there!  It was very unnerving. (Country Roads 5/10)

Now, being from Sydney where the taxi drivers point their cars toward you and gun-it, I actually felt quite safe bicycling in Dublin.  It seems that the drivers here are mentally more well equipped probably from the experience of dealing with bicyclists around Europe.  There’s also bicycle lanes here which are amazing and it also helps that Dublin is pretty flat.  Sydney sucks for cyclists.  We need to carry license, wear a helmet, a dinky bell that no one ever uses (because, ya know, no of us know how to alert people with our voice) and lights even if you’re not cycling at night.  If you don’t carry these things, you get fined something like $300+ –  A real deterrent.  So, yes, bicycling in Ireland is a breeze.  (Dublin Roads 7/10)