You can probably guess that I was a kid with a very unconventional life, but did you know that my childhood is actually stranger than fiction?

Here’s one story that I’m quite fond of.

At the tender age of eight, I lived on a lake in Marlton, New Jersey.  I had about 37 acres of freedom to roam around unassisted on a horse.  Imagine having your very own spotted pretend unicorn that you can take on adventures pretty much anywhere. Pretty cool, huh! 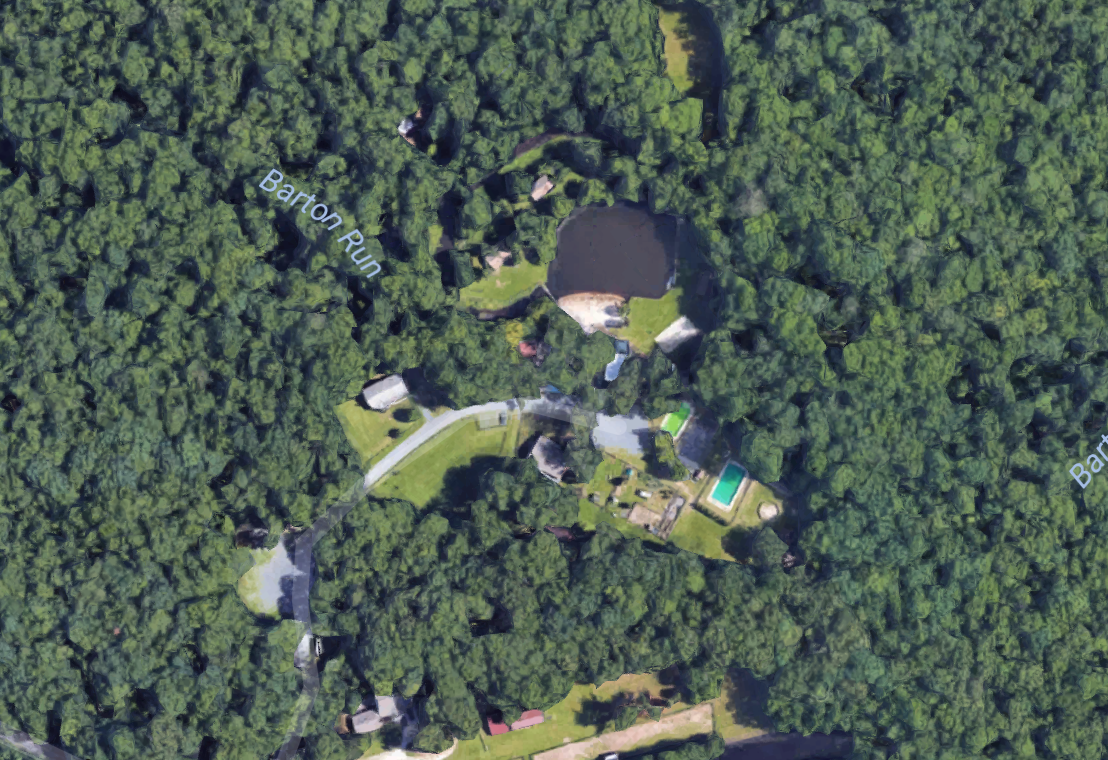 This was awesome for a kid my age.  Bandit was my bad ass best four legged friend who happened to be an Appaloosa.  We would go down to the lake for a bit of fun.  I’d be sitting on Bandit without a saddle or a bridle and for me, I was only wearing shorts, a tank top and no shoes because…. safety first!  At the lake, Bandit would play in the water.  He’d paw it with his hooves making big splashes like a kid.  It was quite a load of fun.

And, unassisted by a horse, I too, would swim in that lake.  However… every Spring, the ancient rock of death would appear and scare the bejesus out of all the parents in the local community.  This forced kids to be housebound and forever restricted from entering any lakes in the Mid-Atlantic region.  These were tough times.  The parents were scared, the kids had energy to burn and this was the the 80’s.  Not to mention, it was snapper turtle season.

Snapping turtles are these freshwater bond villains with razor sharp jaws of steel that come out of hibernation around spring time and will prey on anything that looks tasty. It’s kinda like you’ve just had a big New Years Eve party, and you’re fighting the hangover from hell after sleeping most of winter away.  When you finally wake up, there’s three things you want: 1. to brush your teeth. 2. to stop thumping headache and 3. eat some godawful greasy meal from MacDonalds.

Basically, kid toes are bite size morsels of turtle appetisers and if they’re wiggling all care free in the water… well, tragedy can strike.  Old mate Morla probably has the eyesight of a 103 year old, and since it’s Spring, hasn’t cleaned up his lake yet from his crazy New Years party.  So setting the scene: The water is looking as messy as the Swamp of Sadness.  There’s nothing in the lake to feed his hunger pangs. Morla doesn’t care what he’s gonna eat, and since he just woke up.. this turtle is HANGRY!

My parents owned a popular recreational park and swim club and every Summer, the same thing would happen with the snapping turtles.  NOBODY can go for a swim in the water because you’ll lose toes.

One day, as my mom was walking around the lake, one of our lifeguards caught a snapping turtle on her fishing line.  As mom spots this toe chopper, wouldn’t you guess it… Mom FREAKED.  Now just to let you know, all the crazy things that happened in my childhood pretty much happened when DAD WASN’T HOME. There was a lot of, “OH DON’T TELL DAD” when mom did something wrong and there there was always, “WAIT UNTIL YOUR FATHER COMES HOME!” when I did something wrong. 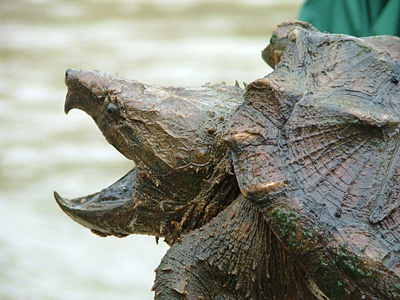 So, I’m eight.  Mom sees this turtle.  Panics.  She runs over to the house.. and like any good middle-aged gun-toting American would do, comes back five minutes later to the side of the lake with a shotgun.   I’m like WTF before even knowing what WTF meant.

Mom loads two rounds into the rifle.  Looks over at the lifeguard and then looks over to me.  I knew the drill.  I put my finger in my ears, and mom put the gun up to her shoulder and points the rifle down into the water.

BOOM!  Water went everywhere… and the bullet went flying out of the water in the other direction!  Swear to frickin GOD – the bullet ricochet off the shell of the turtle!

Mom pulled the forearm of the rifle back again with a click.  BOOM!  This time water and chunks of turtle went frickin EVERYWHERE!

The shell-shocked lifeguard slowly walked over to the edge of the lake and pulled up her fishing line.  The turtle was still attached.  After a bit of wrestling, they both got this mega beast close that’s the size of small paella pan out of the water and onto the concrete edge.

Blood and guts were everywhere and this thing was still walking!  But wait… what the?  Where was it’s head?  Turns out, mom had pretty good aim, and was able to blow the head clean off the turtle.

Mom and the lifeguard carry the thing over to the barn and hung it to let it bleed out.  Apparently, after lopping off the turtle’s head, this is the chosen method of the turtle cleaning process. (and if you’re looking for more great turtle cooking tips, you can find it here!)

Dad comes home, mom tells dad the story.  He doesn’t flinch.  This is just ‘normal’ in this world I grew up in…

A few days go by and mom wants to make turtle soup, so dad brings the turtle in, mom grabs a pot and fires up the stove.  She places the dead turtle in the water and cranks up the heat to boil.

I’m sitting at the kitchen table like a good kid just colouring in my colouring book.  Mom leaves the room and I’m alone in the kitchen sitting at the table.  Behind me, I hear what sounds to be someone kicking water… Mind, you I grew up in a pretty creepy house so weird sounds were nothing new to me… but then, I hear it again… there’s weird splashing.  I look over my right shoulder… and that’s when I saw it.  OH MY EFFING GAWD… The turtle is KICKING IN THE POT OF WATER!

I was pretty traumatised, so from this point on, I have no idea what the heck happened from here on out.. but what I can tell you is, we did have turtle soup.  I also believe it was the last time I ever had turtle soup, too.

3 thoughts on “Growing up is Traumatic” Leave a comment ›